In anticipation of World Bee Day (which has already begun in New Zealand at the time of writing!), here's a special patch. It's not quite an "update" on the scale of the Informational Update or Hiveversary Update, but it adds a bunch of new content, rounds some rough edges, and fixes some bugs.

This patch initially had a possible crash when viewing Throne Room vignettes. This has been hotfixed in v1.2-68. Apologies to anybody affected! 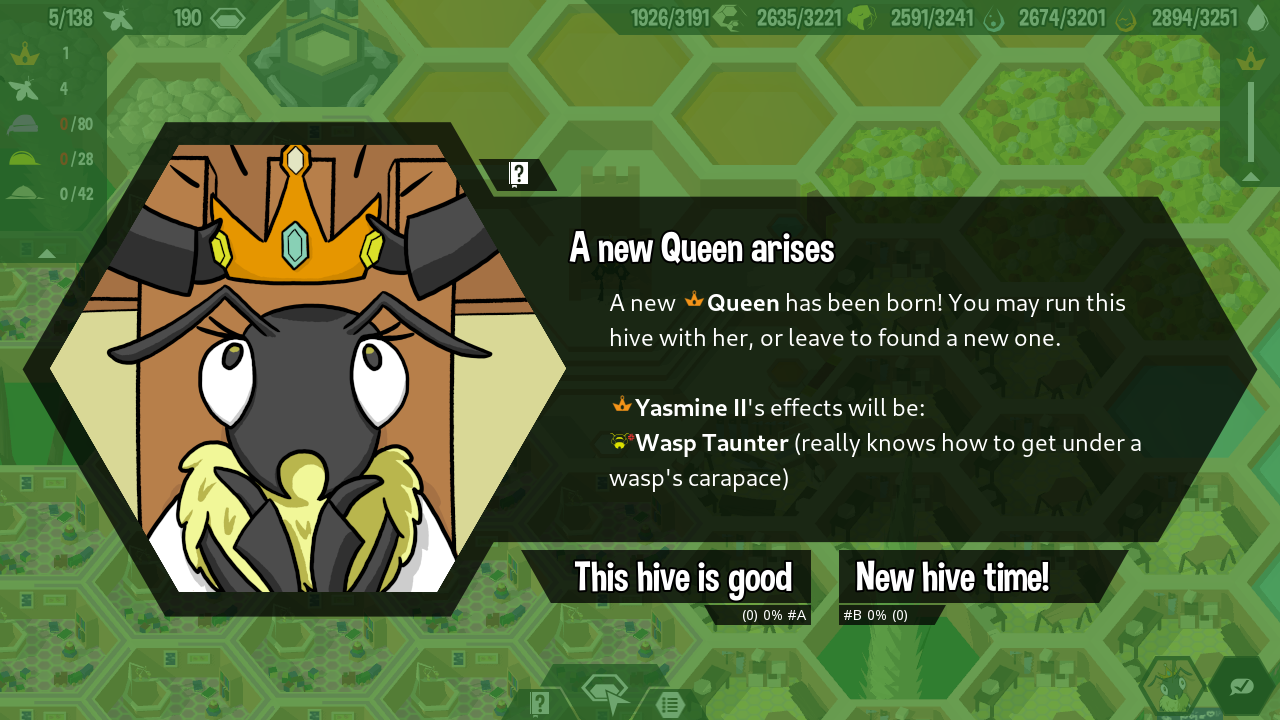 The biggest addition in this patch are rare Queen decrees that provide some bigger-impact effects. My favourite is "Shared (Im)mortality," which prevents bees from dying of old age while that Queen is alive - it goes strongly against the kind of population management strategies the game typically asks players to engage in, and I hope is as interesting for players as it is for me!

Discovered rare decrees will appear in the Queen topic in the Beepedia to make them easier to keep track of. If this sort of thing isn't to your tastes and you still would like to research the Royal Decrees upgrade for regular decrees, there's a new Find Your Own Fun option that allows rare decrees to be disabled. 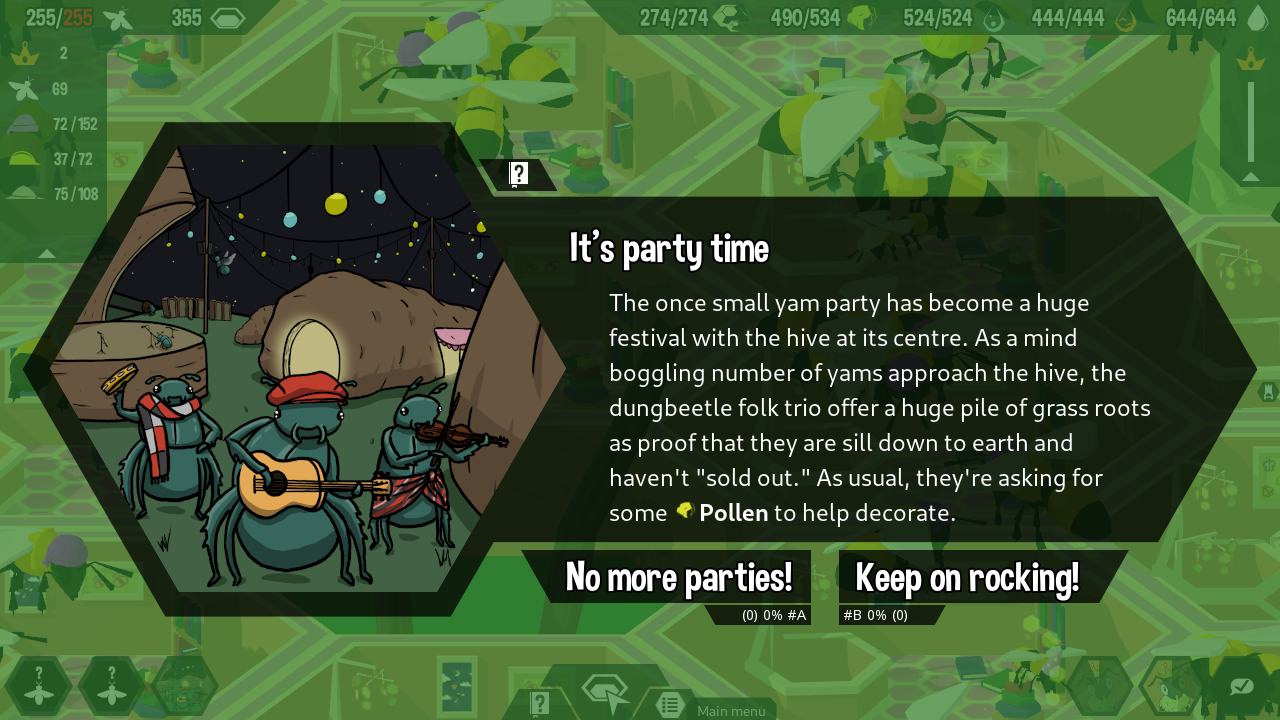 A number of new and updated event images found their way into this patch. In particular, every event in the Yam Party chain now has its own image, and the Drink Responsibly event is now a lot less sketchy. Several vignettes now have special image variants as well. 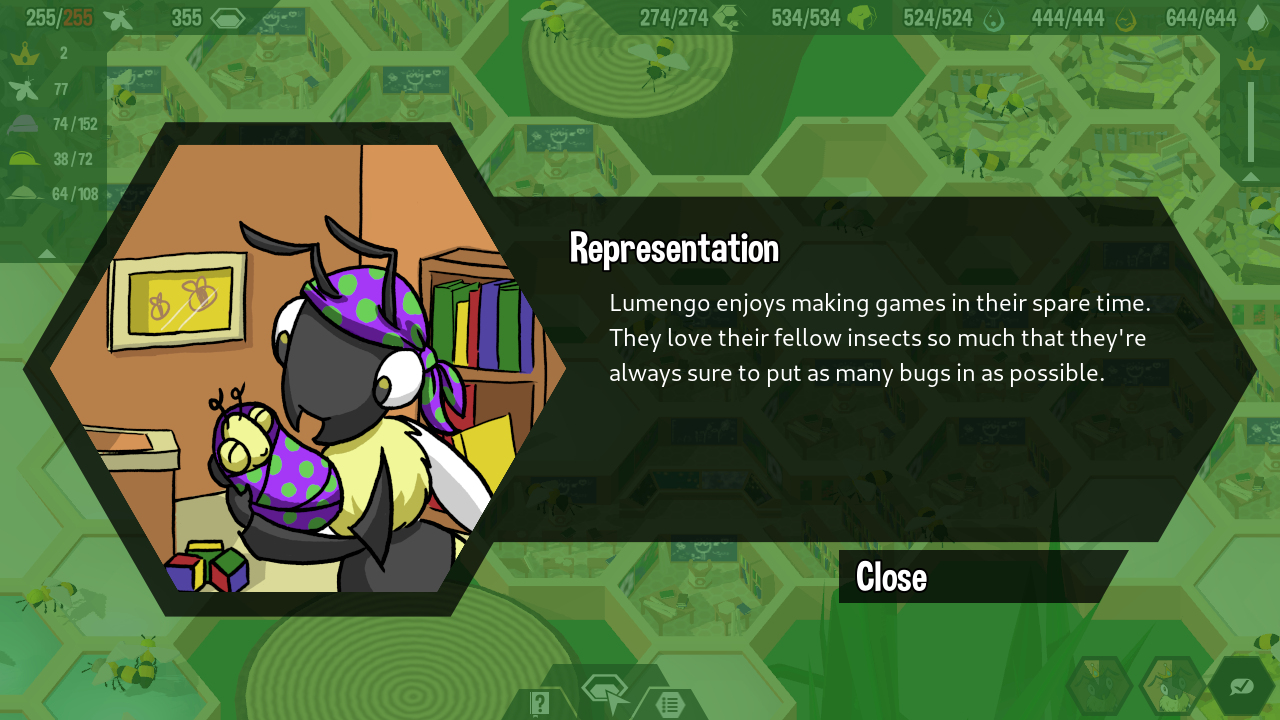 Speaking of vignettes, I've written 106 new vignettes, doubling the number that were previously in the game. Vignette queuing has also been updated to prevent unseen vignettes from being skipped, so it will take longer for event lists to be exhausted and shuffled back into circulation. 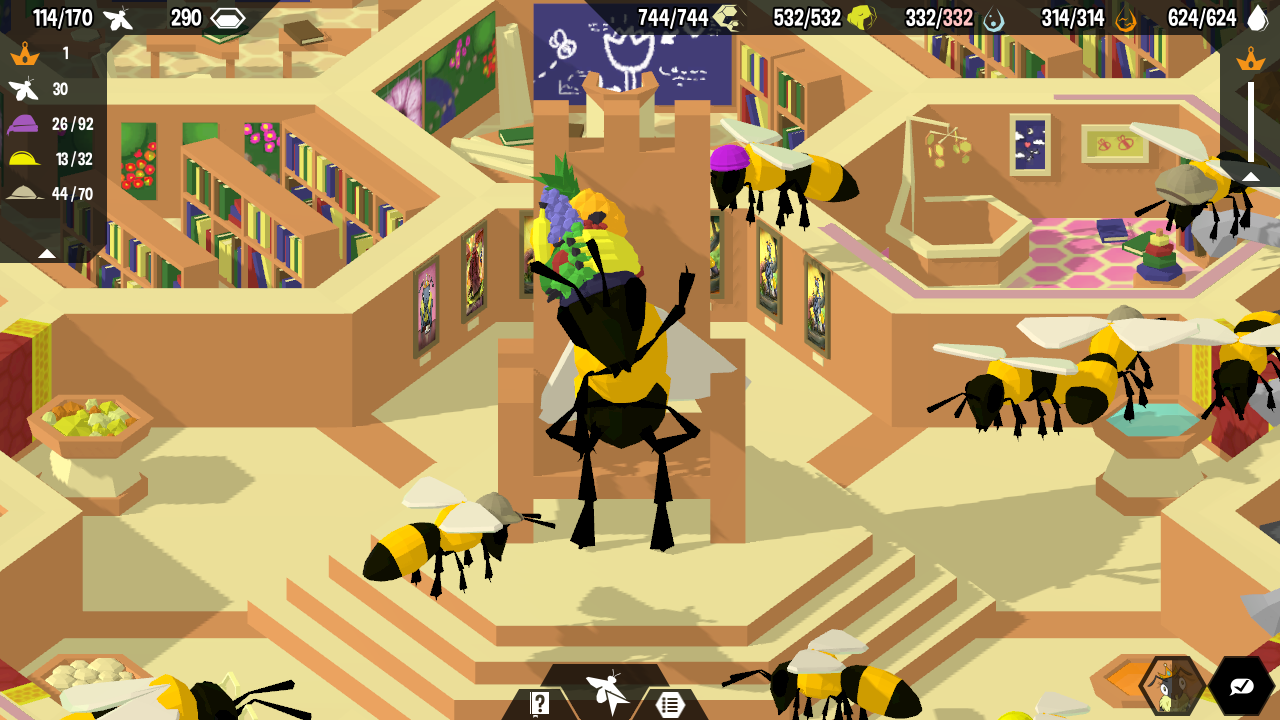 For those of you who like hats, eight new hats have been added to the game, and a bug preventing customised Queen hats from being saved/loaded correctly has been fixed. 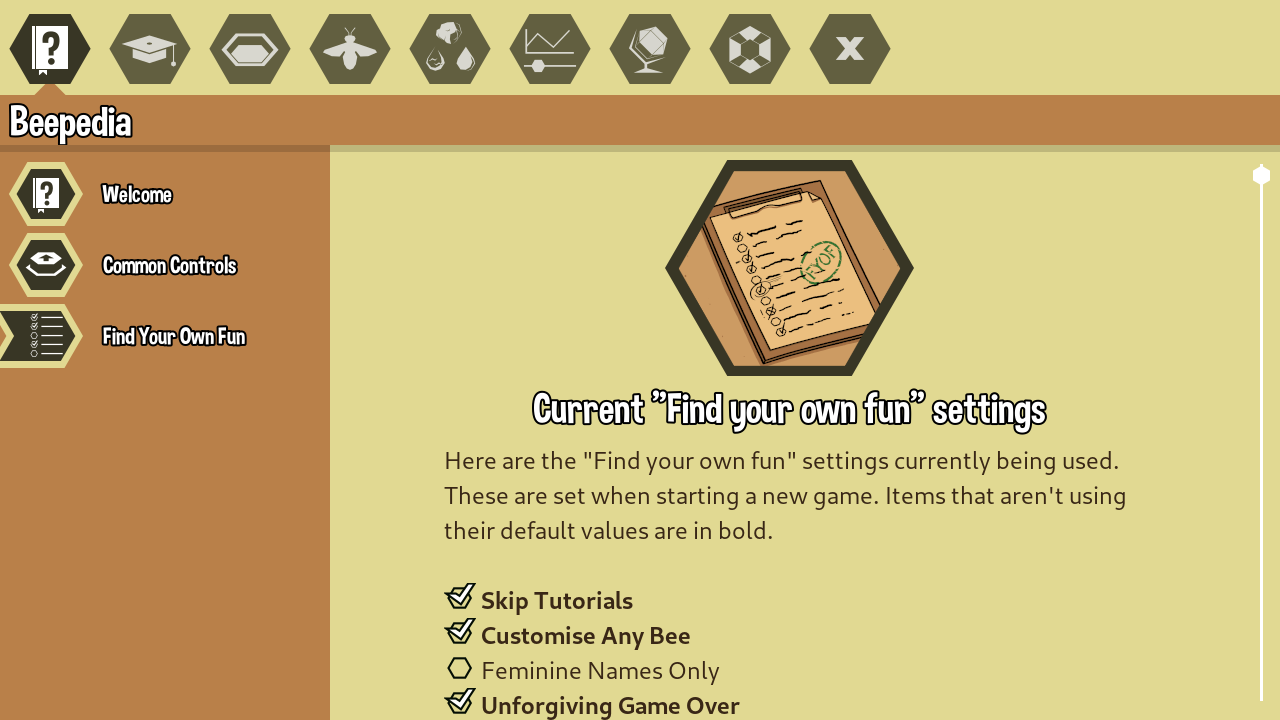 The Beepedia has received a couple of new topics. Of particular note are the new topics allowing common controls to be seen without heading back out to the main menu and current FYOF settings to be reviewed (for the first time! Apologies to anybee who wanted to check that stuff).

At this time, other projects are requiring more of my attention, and pending any bugs (the kind without wings) or dramatic changes, this will likely be the last patch of this scale that Hive Time receives. I am disappointed that I didn't get to do the Monumental Update and the Goal Update, but my qualifier for Hive Time's initial release back in 2019 was that I'd be content if I never got to work on it again, and everything since has been a bonus.

Overall, I feel positive about the work I've put into Hive Time, and proud to have made the game I wanted to make. I'm glad to know that it's been enjoyed by so many people (50,000 downloads is so far beyond my expectations), and I'm thankful to those of you who left some  nice words in a review or reached out to tell me that it means something to you.

Thanks especially to everybody who paid more than the game's recommended $10 price - it's been heart warming to see the average purchase price balance around $10 in a way that suggests people pitching in more to cover those who can't afford much in these difficult times. Talking about money is weird and uncomfortable, but if you'd like to read more, there's a whole article diving into Hive Time's finances with budgets and graphs and things.

I hope that this patch brings something that you appreciate. If you play on the 20th of May, keep an eye out for the in-game World Bee Day event.

Bee nice to the bees in your life, and enjoy!