Once again, today is a special day. Not only is it one year to the day since Hive Time's release, but the game has also received a celebratory update! Here's a new trailer with an overview!

A year's worth of history

Here's some further reading/viewing/playing that looks back on and digs into Hive Time's first year and beyond for anybody who's keen to celebrate and remember with us.

If you're just keen to read/watch/listen to what other people have to say about Hive Time, you can find a big unformatted list of known coverage here.

If you love Hive Time so much that you just want to wear it or hang it on your wall or (consensually) stick it on your friends' faces, you can bumble over to RedBubble. These designs are available with 0% markup to make them as accessible as possible. If you're keen to support the game, consider buying/tipping here on Itch, or becoming a patron on Patreon.

If you want Hive Time for your ears, you can also pick up the game's wonderful soundtrack on Bandcamp. 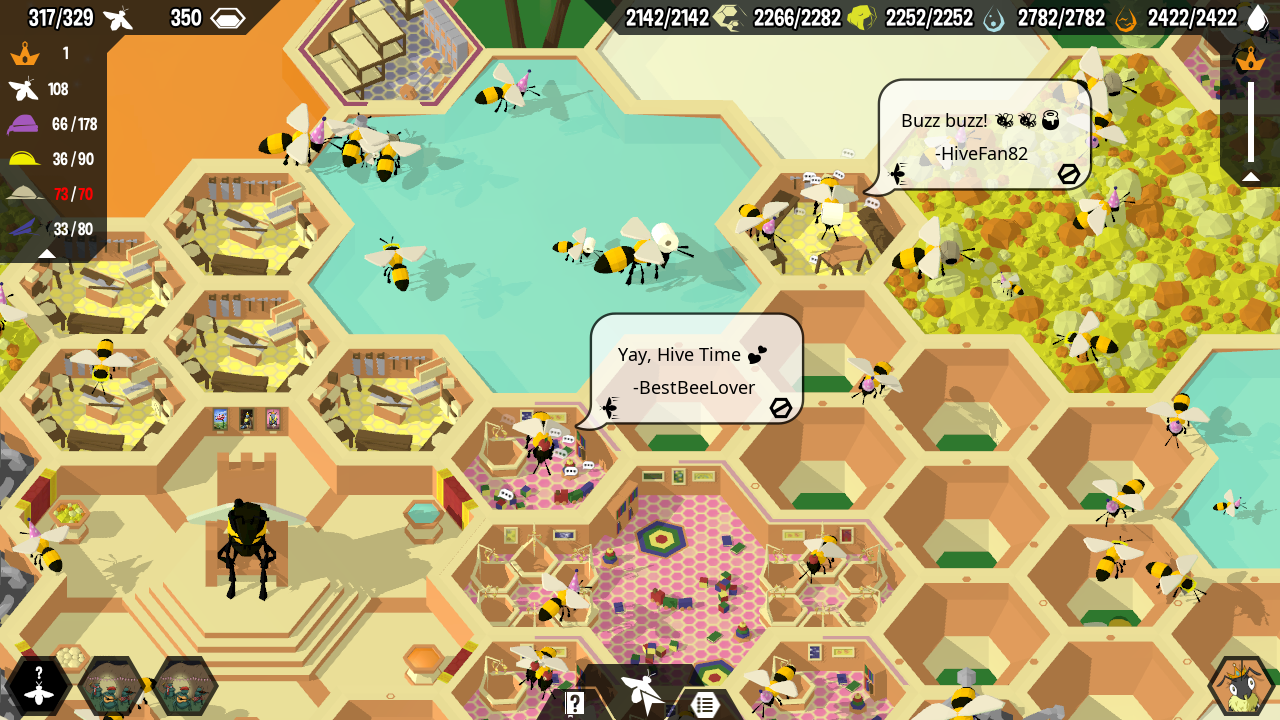 The biggest new feature in the Hiveversary Update is a range of community features centred around chat integration. Active chat users can vote on multiple choice events, helping to guide players away from (or toward!) bad decisions. Chat users can also participate in periodic gift voting to help or hinder players' hives.

Active chat users may also be selected to become "special bees," which unlock some commands that can affect that bee's appearance and behaviour (typing !help in chat will display a list of available commands for that user).

Chat participation may not be for everybody, though! These features are all optional and independently toggle-able to allow players to customise the level of presence and control that chat users can have over the game. In addition, there are blacklist and whitelist functions to prevent particular users from interacting with the game or to restrict participation to specific users. 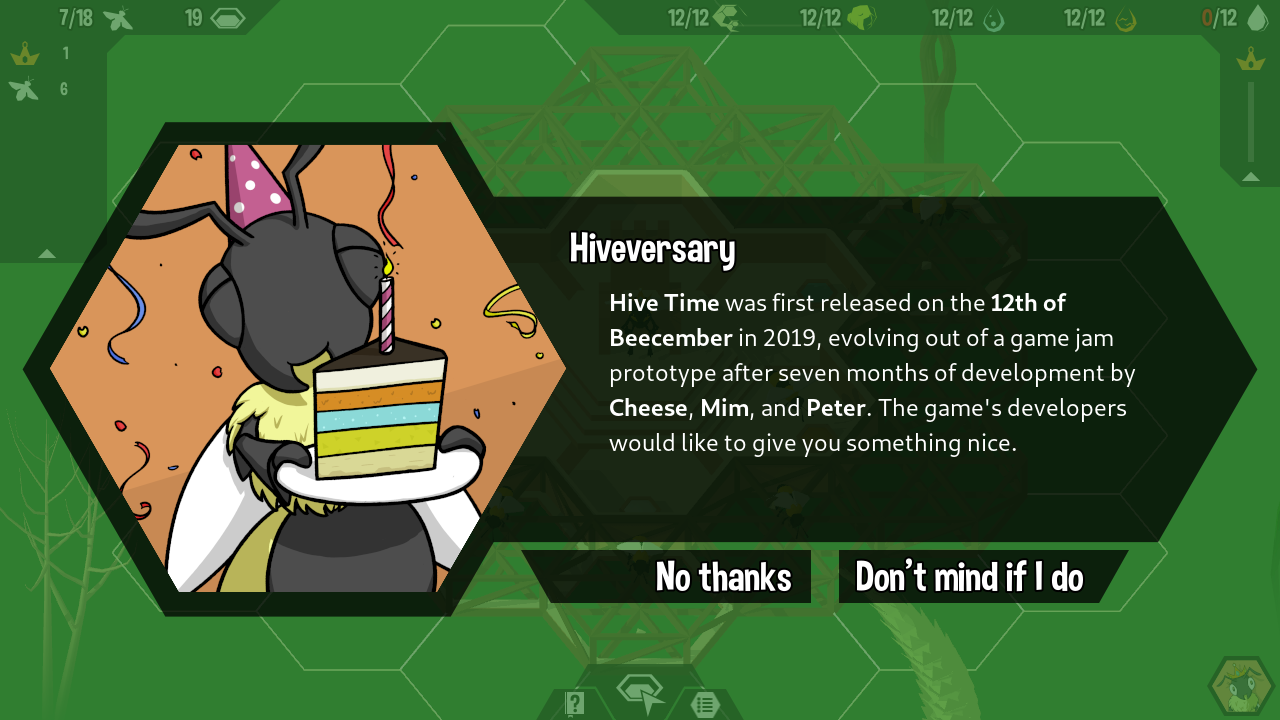 The Hiveversary Update includes a bunch of new and updated events, including a couple of new date-based events, the first of which, you should be able to see in game by playing today (assuming it's the 12th for you when you read this) or on the 12th of Beecember in any year to come.

There's a new hat for every role. In addition to "hats" that reference Honeycomb CRUNCH and Supply Chain, the Queen looks dapper in her teeny bowler hat, Defenders are ready to face any danger wearing saucepans on their heads, and Beesitters can now wear an apple. It's fresh. Promise.

Less visible, but still fun, there are a range of new effects, some of which are triggered by events, and others of which can show up in periodic gift voting when chat integration is enabled.

New ways to find your own fun A bunch of new Find Your Own Fun options have been added to the game, such as skipping events with dominant negative outcomes from triggering, or allowing "special bees" to spawn before the throne room has upgraded.

As part of the new community features, an option to manually spawn chat-assigned "special bees" from the Throne Room is available. Since this is chat-integration focused and treats active chat users as a resource, you can find this as an option in the Community Settings menu rather than among the Find Your Own Fun options.

A lot of work has gone into optimising Hive Time for better performance with larger hives. Primarily this has focused on small gain items, which may not produce dramatic results across all hardware, but the game should still run at least a little better in most cases.

There are also some new settings that may provide performance increases for some users.

The Hiveversary Update started out as a small patch to fix some small bugs and address a couple of nice-to-haves. Over time it's grown to include dozens of fixes and changes.

The offscreen Throne indicator won't display when upgrading the throne, Beepedia topic unlocks now give an activity notification, Fireworks now have sounds, and the cool cool band name puns we'd wrote now actually show up in some vignettes and events. It's no longer possible to move the camera to a position where it will clip through the hive if you repeatedly have the camera snap to bees' locations when in inspect mode. The "Start New Hive" button now stays visible when scrolling the FYOF list. The list goes on. And on. And on.

Last, but not least

I'd like to give a big thank-you to everybody who took some time to test a pre-release build of the Hiveversary Update. It's been a lot of changes in a very short period of time, and I couldn't have gotten the game to where it is without their help!

And I'd like to give a very, very big thank-you to Peter, who came through with the new music tracks without much notice, and help round out some spots that previously felt a little emptier.

Thanks! I think this is the biggest update I've done on the game so far.

Updates like this tend to condense a lot of work down into one item because they're new and the iteration isn't so relevant to players (the Informational Update had an item that was just "Added Beepedia" :D ), so it was about 100 lines longer when I pulled it out of git to begin with.