This patch initially had a possible crash when starting a new hive with a new Queen with Royal Decrees. This has been hotfixed in v1.2-96. Apologies to anybody affected!

Hive Time had its second birthday on Sunday, and to celebrate, I'm happy to share a new patch and trailer.

The biggest changes in today's patch focus on Defence and Foraging management.

The Upgraded Map Room now unlocks a foraging priority slider that allows you to influence whether Worker and Forager bees will collect more pollen or nectar. In addition to offering another tool for responding to or pre-empting mid-game resource surplusses and shortfalls, this also makes the Foraging screen to more useful to players who aren't interested in engaging with the pollination mechanic. As with most of Hive Time's management system, it's entirely optional. 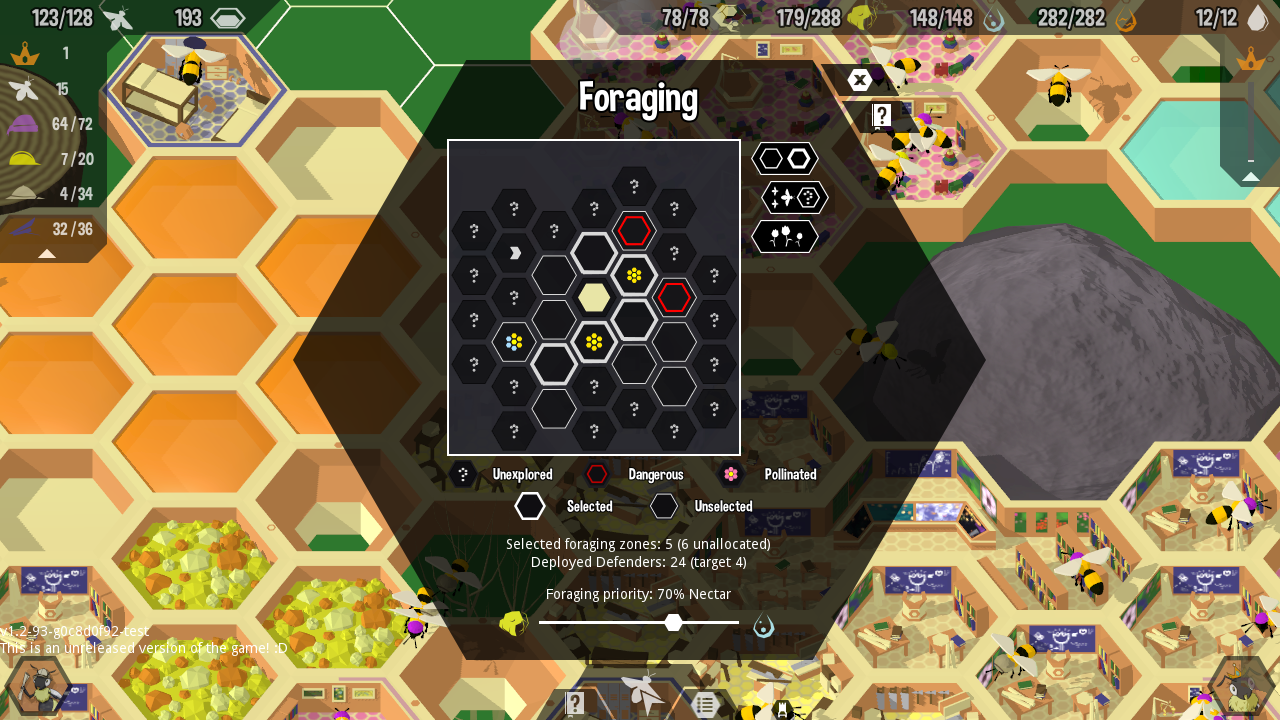 Defender deployment has been overhauled to now control how many Defenders should be deployed *per Barracks cell.* This allows deployment to automatically scale alongside a hive's growth (providing more Barracks cells are constructed) and makes behaviour more predictable. My core philosophy for Hive Time's management systems has always been to make things as optional as possible, allowing for as little or as much micromanagement as a player appreciated, and the old deplyoment behaviour required too much attention and fiddling to really align with that. Previously, the slider set a fixed number that was a percentage of the Defender population *at the time the slider value was changed,* which could often leave players overestimating the number of deployed Defenders and thinking they'd responded to an emergency when the game was still expecting them to go poke a slider.

Defenders are now automatically deployed or recalled when the slider is adjusted, and the deploy all/recall all buttons have been turned into toggles that can be treated as alert statuses which override the slider's deployment target. This makes Defence management feel a lot more responsive and readable. Good times!

As part of these changes, I also removed all of the instructional text from both management screens. The result is that both screens have more functionality, but feel less cluttered. Each screen now has more tooltips, and the Beepedia still exists as a more comprehensive and directed explanation of the management systems, so the amount of information available to players hasn't been meaningfully diminished. 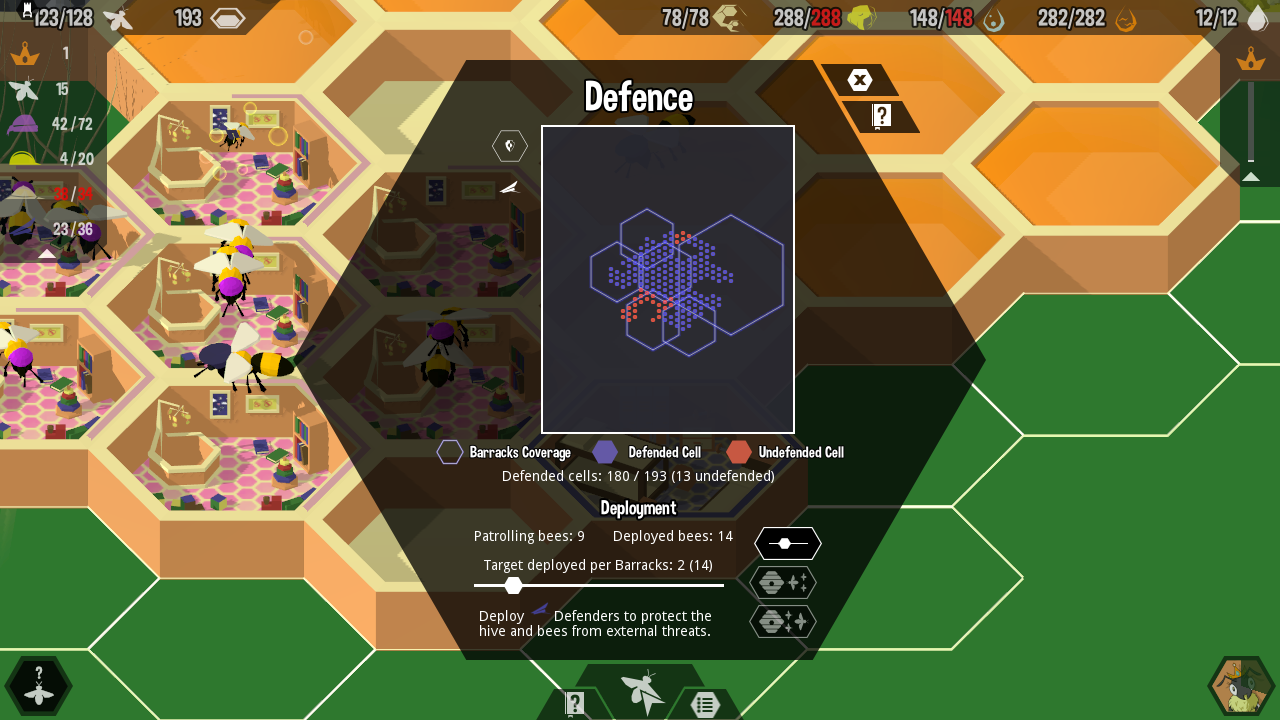 Under the hood, Hive Time has been upgraded to Godot 3.4, taking advantage of some upstream improvements. Alongside this, I've also made optimisations to the Defence screen, input processing, cell processing, bee processing, and audio processing that should improve the behaviour of very large hives.

Very large hives are now a little easier to grow thanks to an overhaul of how Hive Time's "birth debt" is calculated. Previously, this was limited to three bee spawns' worth of Beesitter labour that could be accumulated in reserve so that when at the population limit, new bees could be spawned immediately when old bees died. The limit meant that birth debt couldn't be accrued faster than three bees' worth every game tick, which put a hypothetical limit on how fast bees could spawn. In reality, the game slowing down on larger hives meant that game could take longer, which further reduced how quickly large populations could grow. Upgraded Nurseries now increase the birth debt limit, and birth debt accrual is now less subject to game tick speed.

It's still possible to make hives big enough to slow the game down, but I'm hoping that in most cases, the thereshold has been raised. 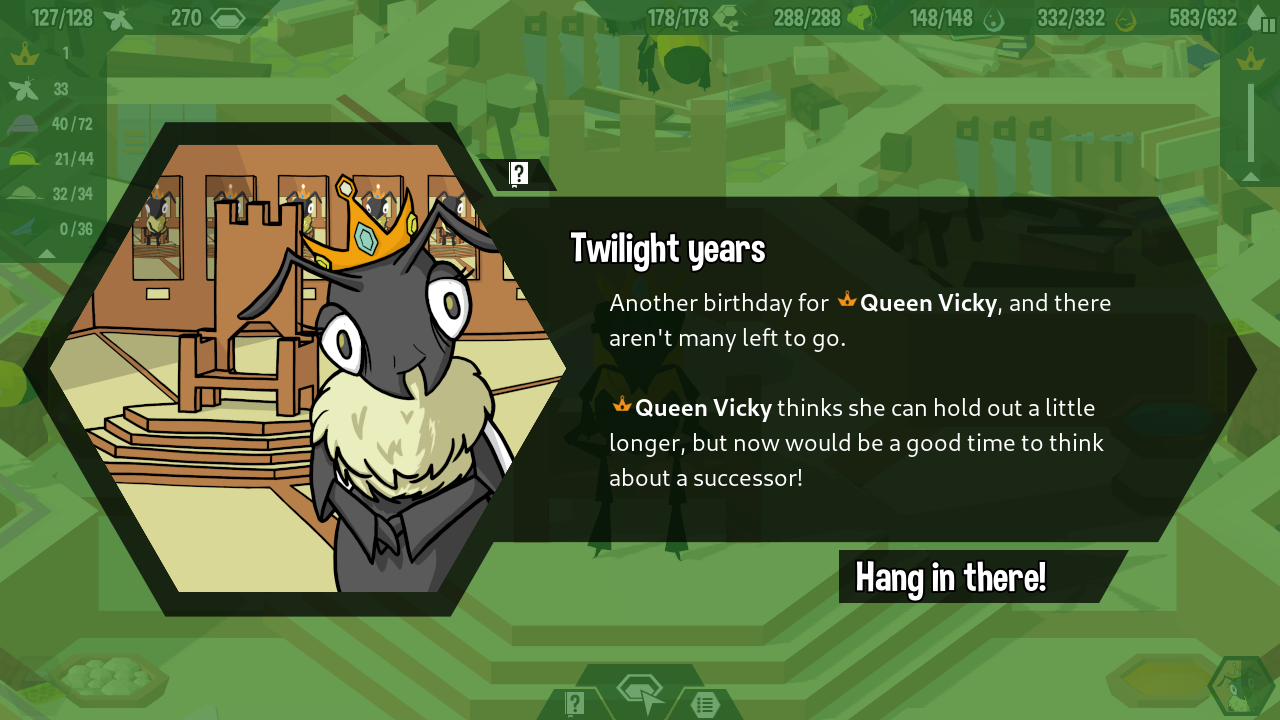 Today's patch brings a number of small quality-of-life improvements. The Twilight Years event that triggers when a Queen is one minute out from dying will now extend the Queen's life span if there is enough available Jelly storage and current Jelly levels are close to 600 - no more Queen deaths while last 10 Jelly is on its way to storage!

Large scale disaster events will now automatically move the camera to affected cells. This makes damage from events like failed Wax Repairs or Bad Science much easier to identify and understand. It also means that it's a lot harder to miss Old Bitey's paw coming into the hive.

Construction options that have been researched, but have unmet cell dependencies are now displayed as disabled items in radial menus, with their cost panel showing the name of a cell that's required but not present. This makes it clearer why some construction options are not immediately available after moving to a new hive or having all of your workshops blown up. 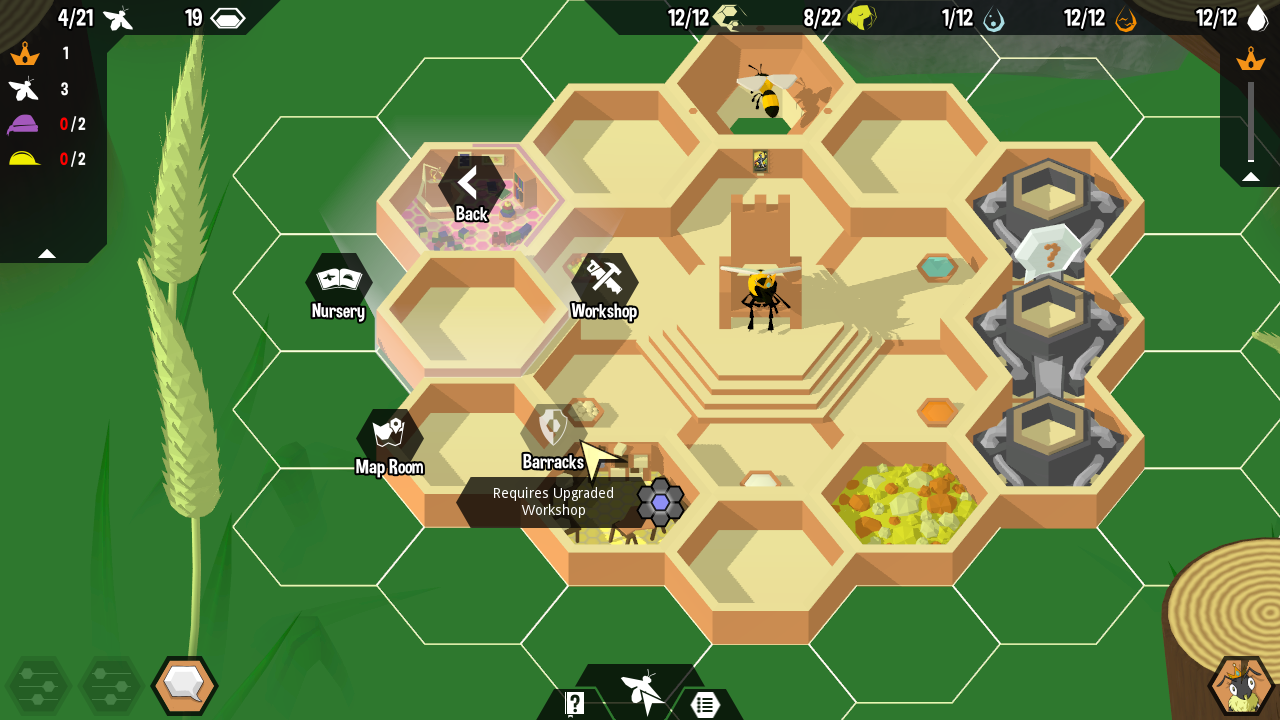 Last, but not least, there are a bunch of miscellaneous fixes and tweaks. New Queens spawned after loading a saved game while an existing game ws in progress no longer have a chance to lose their name. Pressing back and then returning to the New Hive screen no longer breaks custon Queen names. Management screens now use the correct theme for tooltips, bee hats that had transparency in them prior to bee wings being made opaque are transparent again now, chat bee messages are no longer processed when the game isn't visible, and Nurseries and Workshops no longer start with their progress rings half filled.

As Hive Time turns 2, I want to give a very special thank-you to everybody who took the time to say something nice about our little bee game. It's very heartening to know that it means so much to so many people. Although they are not included in the trailer, I'm thankful to everybody who left a review here on Itch (user reviews on Itch are not public, and so it didn't feel right to quote them).

At the time of writing, over 70% of Hive Time's 182 Itch user reviews think the game is worth 5 stars, and a further 20% give it 4. If this was Steam and assuming the 3 stars or higher is a thumbs up, that would equate to a Very Positive rank (only because Overwhelmingly Positive requires at least 500 reviews).

You are all lovely, and I'm very happy to have shared a nice game about bees with you ♥