Today's update breaks a half-week-long drought with a bunch of new stuff! 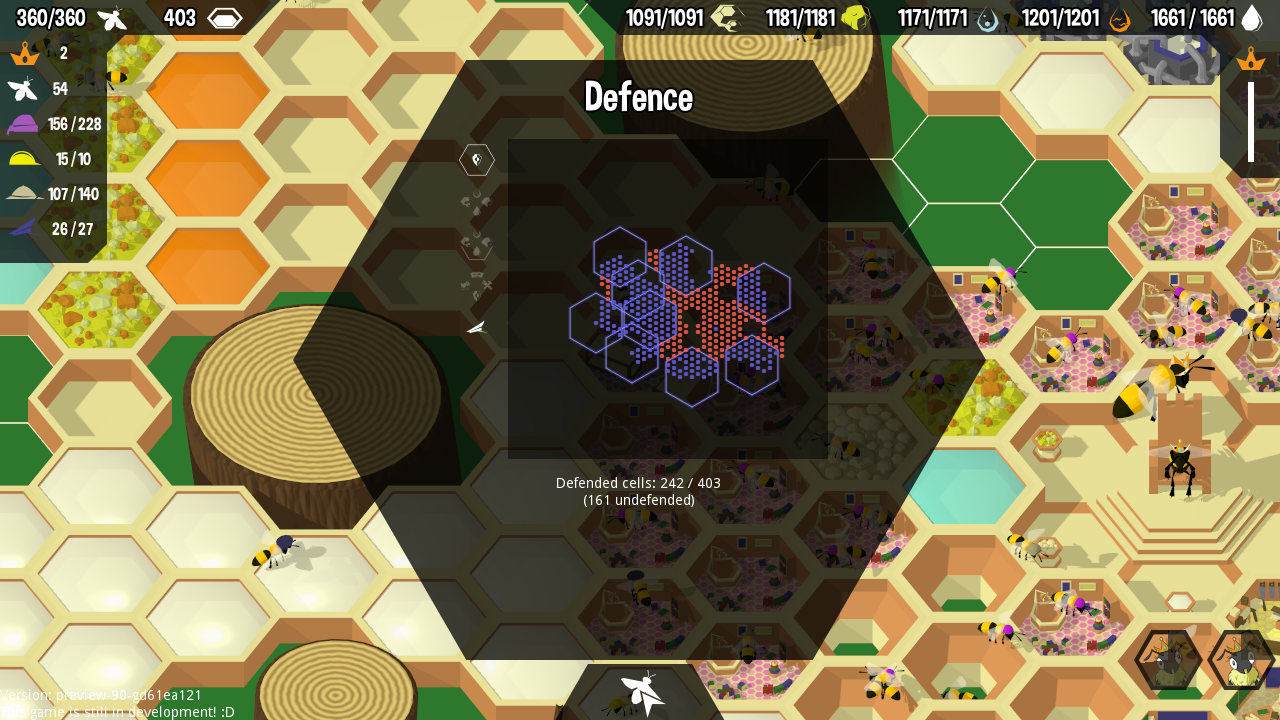 Most notably, a Defence screen has been added (accessible from the Barracks), which gives an overview of the hive's defences - namely, barracks coverage, and how recently Defenders patrolled areas/individual cells.

This is a first pass, and I suspect the presentation will at least change a little to allow everything to be a touch more readable, but for now, defended/undefended cells affect the types of events that will be shown. For example, if wasps attack and all nectar storage cells are defended, then Defender bees will be free to protect the hive's population without any loss in resources, but if there are undefended nectar storage cells, then the choice between saving resources and saving bees is presented as before (providing you actually have some Defenders!).

The next biggest thing is a bunch of optimisation work. I hadn't intended to do a proper optimisation pass, but while taking breaks to consider the Defence screen's implementation, I found myself addressing some low hanging fruit. Bee AI and cell processing in particular have dropped dramatically, which should improve performance on low end systems that may previously have been hitting CPU bottlenecks.

I've also added an option in the settings menu for disabling shadows, which removes what is probably the most significant rendering overhead (at the cost of making the game less pretty, but I figure that's a good option to have for people who may not have access to computers that are as fast as the rest of us). There are still some optimisation stones I haven't yet turned over - there may be more camera/environment settings that aren't relevant to Hive Time that I can disable, and Godot has a MultiMesh class that apparently improves the performance of rendering identical 3D models (such as, say cells!).

Another change (or fix) involves adjustments to bee efficiency. Internally, Worker bees have an efficiency of 1, and the specialised roles have an efficiency of 2 (leaving room for possible research options to further increase efficiency if I end up adding them). Efficiency is generally used in bee activities to affect how our little friends go about doing things. In a refactor of some bee related stuff I did a while back, I inadvertently reset all bees' efficiency to 1.

With that fixed, Foragers now gather (on average) twice as many resources as Workers and Builders now construct cells twice as fast as Workers. This shifts the dynamics of mid and late game resource gathering and hive expansion a whole bunch - a good population of Foragers can now support multiple honey refineries, and that (combined with the recent changes to reduce production wastage) opens up another viable strategy to pursue in the mid game.