Today's patch adds some new Queen animations, a new "find your own fun" option for Queen lifespans, a button that opens reference URLs for Beepedia facts, and a bunch of other misc tweaks and fixes. 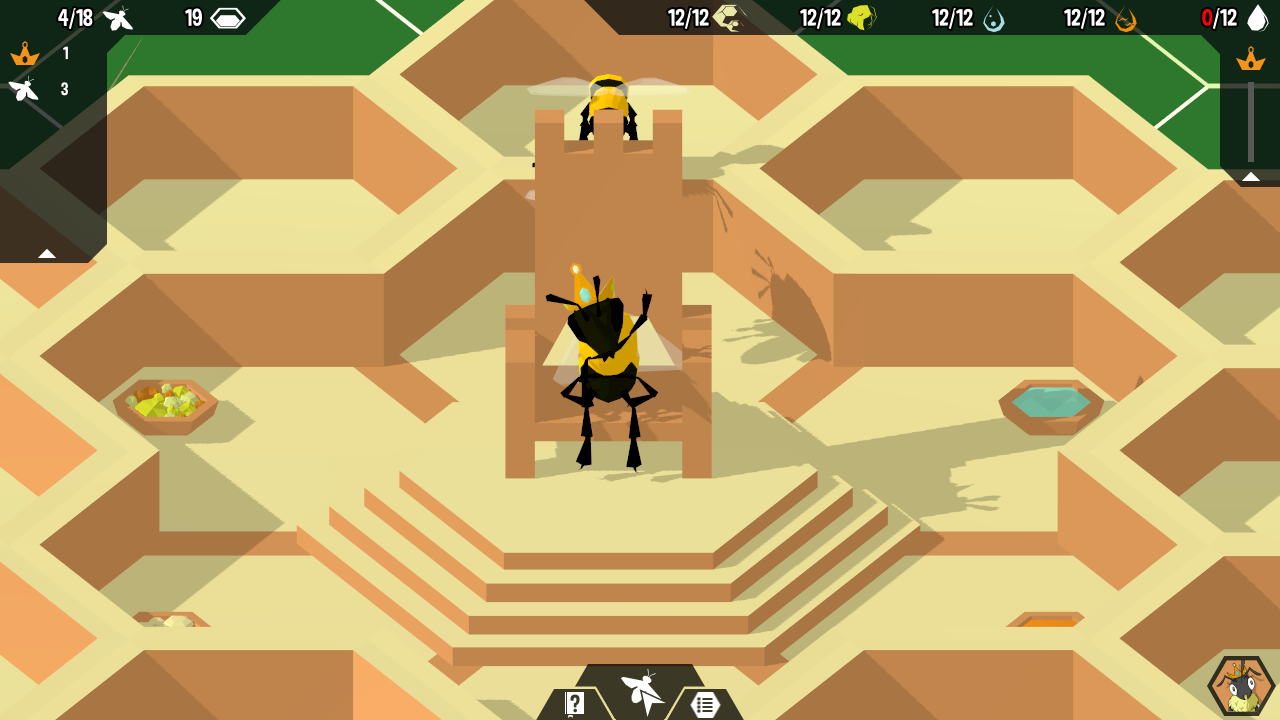 Giving a bit more life to the Queen is something that's been on my todo list since before the end of the jam we initially prototyped Hive Time for. Other things always ended up being higher priority. In terms of impact, a player will generally notice that she doesn't move when they start playing and then never think about it again, so while having time to do it would be nice, it didn't ever feel critical.

And that's fine in the context that Hive Time exists in for players. Someone can have fun with it regardless of whether or not the Queen is specifically interesting. It also has the side effect of lowering expectations slightly, which in turn makes other things like the research effect stand out a little more.

Lately I've been looking at submitting Hive Time for some awards, and while a static Queen might generally be fine for playing, it's not a great first impression from an assessment standpoint. The Queen now looks around, yawns, stretches, cleans her antennae and sometimes waves at the player.

Finding the right balance of animation density has been tricky - it turns out that the moment there's some movement, any time where there isn't any movement immediately stands out. I've made a mix of "idle" and "action" animations to make sure that high energy animations are sprinkled among less-distracting low energy animations. Animtion is a skill that I feel like I've never really been able to invest any time in growing, so this work has been way outside my comfort zone. It was interesting to do though, and if you're interested, you can watch me doing some of it here.

In general I'm happy with how they've come out so far and I figure what's there now (like many other things in Hive Time) is a foundation that I can build on later if/when I'm able. This aligns with the development philosophy I've had from the beginning for Hive Time, which is to focus on doing as much with as little as possible while leaving room to expand and polish later if needed.

Now that she's not static, it looks even more odd that the current Queen remains seated when the Throne Room is being upgraded - especially when she's sitting cross-legged in mid air! To help there I've added a cute little scaffold throne, which is silly (as it should be) and gets the job done.

If you find yourself not liking the new Queen animations, you can turn them off in the Video Settings menu. 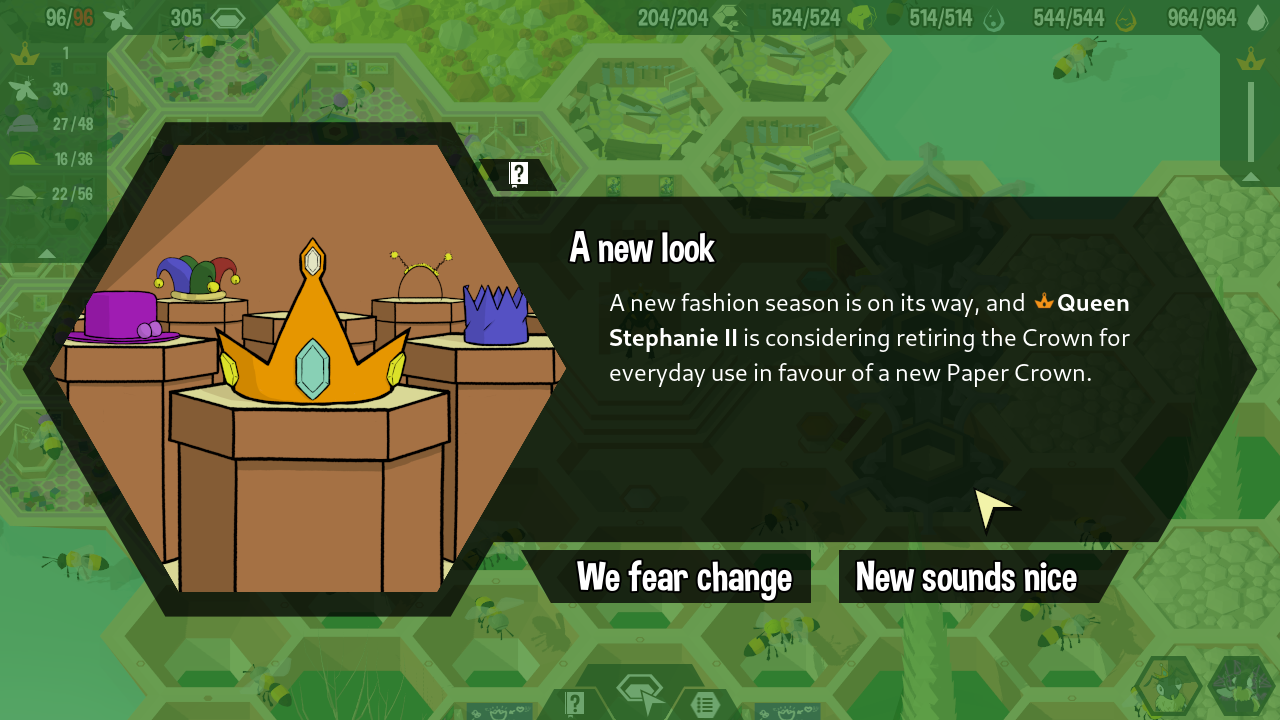 Not only does the Queen move now, but she also has new hats. I've popped in a little paper crown and a jester hat, which makes Queen the role with the highest number of alternate hats. Huzzah. Even more Huzzah is a new event that allows the Queen to pick a new hat/crown for her and her ancestors, which can trigger for any queen after the first.

I'm really happy to finally get this in, as previously there was no way to see any of the alternative Queen hats without enabling the "Customise any bee" FYOF option, which ends up partially breaking the reward that special bees represent. Alternate crowns/hats are just for everyday use, and so the Queen still wears the traditional crown in portraits, events, and vignettes (it might be nice to have variants for each hat for every event/vignette/portrait, but that's a mountain of work for very little benefit).

Another item that's been sitting on my todo list for a long time is the addition of a "Queen lifespan" FYOF option. This turned out to be much simpler to implement than I had anticipated due to some unrelated work I'd previously done to provide speparation between individual bee lifespans and game-wide lifespans.

From an expectation management perspective, I'm still worried that players will treat this as a difficulty slider with the default set to "normal" rather than see the two hour default as a limit that is tuned to be tight for a player who doesn't know what they're doing, but over three times the amount of time a player who's understood and mastered the game's mechanics will need.

My design philosophy was that if a player hasn't yet grokked the system, the continue-playing target shouldn't feel comfortably attainable, and if a player has, then it should feel easy in a way that reinforces and reflects that they've got a solid grip on what the game's doing. I still stand by that approach, but I also figure that, if a player misses out on that balancing because they needed or wanted to poke around on their own terms and still has fun, then it's not something I need to feel precious about.

Cooldowns, lifespans and activity durations are now presented with h:m:s notation (or whatever the equivalent is where the next highest unit is omitted entirely and values are only zero padded when the next highest unit is present), which I think makes them a bit easier to parse. Having 45:15 left on your Queen is a bit more meaningful than having 2715 seconds remaining.

Some players have found the Queen lifespan countdown a bit stressful at the start of the game. I'm hopeful that making the numbers a little more readable will help! 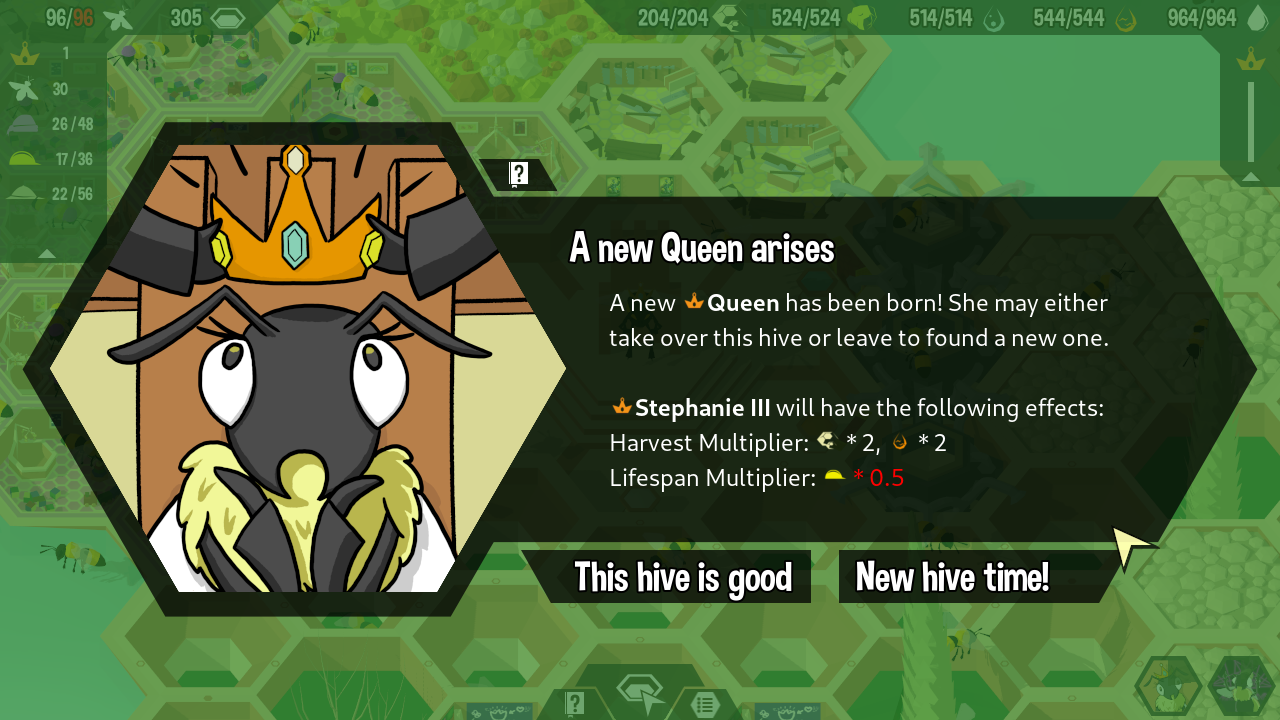 Also on the Queen front, is a change to the way that Queen effects are generated when the Royal Decrees upgrade has been researched. They're now selected before the Queen actually spawns so that they can be included in the "A new Queen rises" event description. My hope is that this will make the choice of whether to start a new hive or not feel a little more interesting. No more "Dang, I wish I'd kept this Queen at the old hive," regret when you move to a new hive with a Queen that has halved Wax producton - if you do that, you're doing it knowingly now :D

Last, but not least, I've added a tiny bit of new UI to the Beepedia. There's a new button that appears when a Bee fact (or any other fact) includes a reference URL. That button will allow the URL to be opened in a browser for further reading.