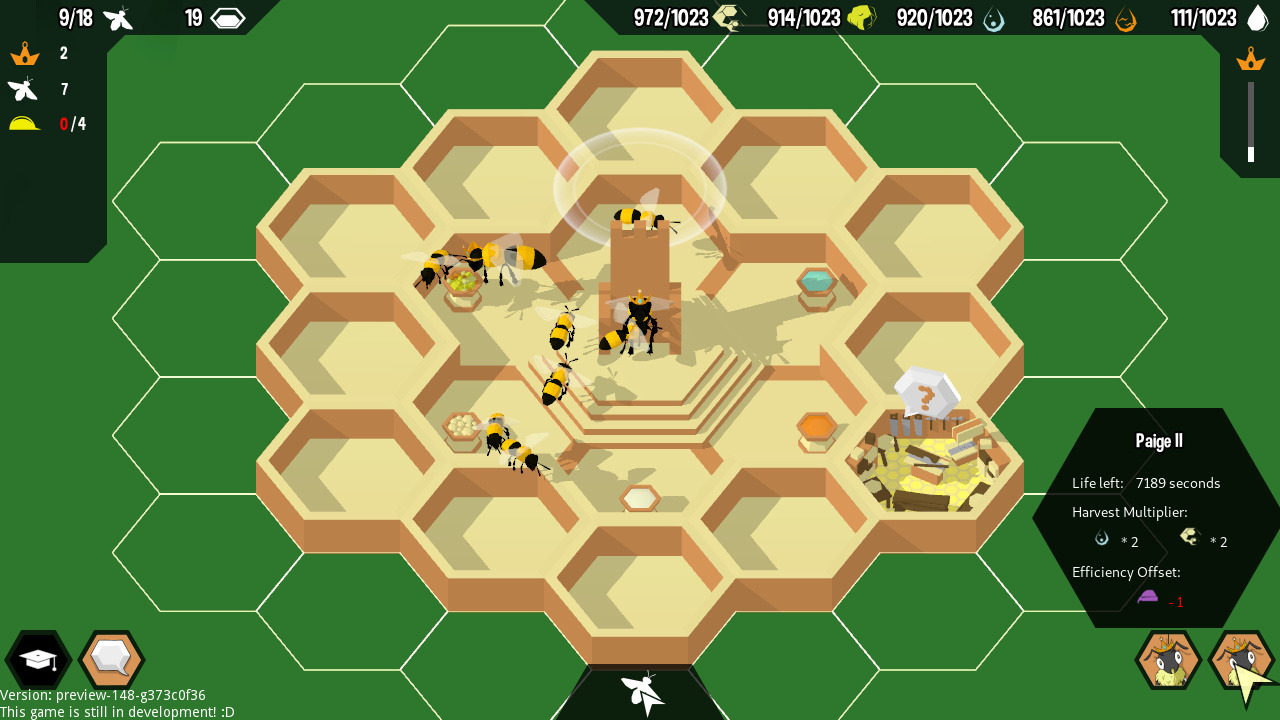 Today's update adds a new research option for deriving extra benefits (and maybe a drawback or two) from future Queens. This is a late game thing I've had bouncing around in the back of my mind for a while that's intended to give some variance and texture to each Queen's reign.

Currently researching this will give every future Queen two positive effects and one negative effect that will last for their entire life. These are limited to harvest multipliers, lifespan multipliers, and efficiency offsets at the moment, but I'm hoping to throw some extra things in that are more specific (a Queen that somehow attracts bears sounds like fun).

Speaking of fun, there's a new effect type that I've added (currently used in the negative branch of the vinehopper science chain) that blasts a hole in the hive and damages surrounding cells. Exciting times!

Also new in this update are a couple of pieces of background music from Peter: a new background music track called Morning Buzz, and a new ambient interstitial track that features a ukelele. Here are some thoughts from Peter about the former:

"Morning Buzz is the 4th and (at least for now) final major background track for when the hive is in business-as-usual mode. When working on the main chord progression I was thinking a lot about a feeling of pleasant anticipation in getting a task underway, which to me gives this track a morning feel - after dawn, but before things have settled into an afternoon routine. Classical winds have featured elsewhere, but here I've given them a bit more of a spotlight, with the Oboe getting itself a solo in the second section where the melody gets a little more wistful."

Last, but not least, I managed to pack in a few bugfixes today as well, the most noteworthy being the resolution of the long-standing barracks-get-weird-at-the-edge-of-the-playspace bug. That should be resolved now. Upgraded barracks' hexagonal indicator in the Defence screen is still not the correct aspect ratio, but that's a cosmetic thing that I can deal with down the track.