Today's update brings in more defence mechanics and the long awaited foraging screen, which means that with the exception of exits, every cell in the hive exposes some kind of interactivity. Since these are a bit intertwined and deep reaching, I've held off on my usual update schedule until I had it all nailed down. 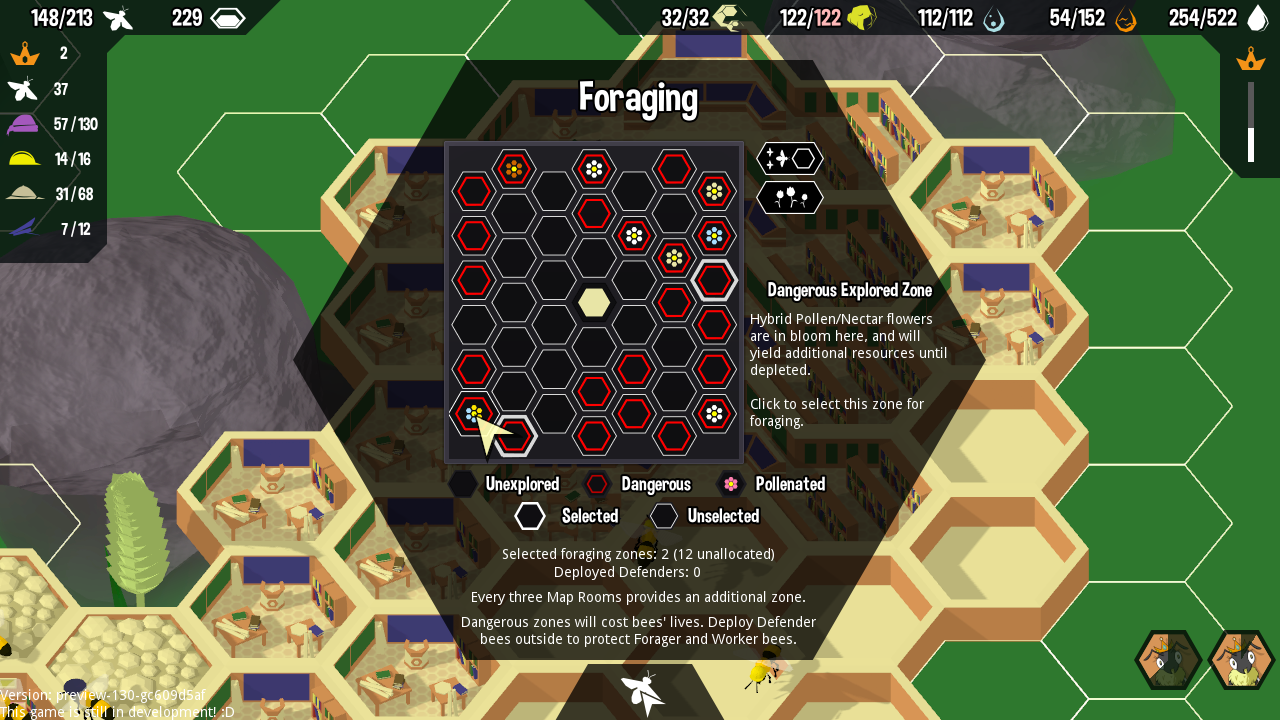 There's still a lot of work left to do and both of these will definitely need a bunch of tweaking, but the current state of the game has every major mechanic I'd had on my wishlist for the full version of Hive Time back when I decided that I was going to make a full version of Hive Time. I don't see much value in subscribing to popular conventions regarding labels for development phases (in my experience, every project is different and you only box yourself in by trying to apply the exact same structure to everything), but this is a hugely significant milestone for Hive Time - moving forward, I'll be able to inform gameplay and balancing decisions with a more complete picture of what the game as a whole is/will be.

The new foraging screen displays an abstract map of the immediate area around the hive, with players able to extend the visible range by sending out exploration parties (which currently costs 8 Foragers) to nearby unexplored foraging zones. Revealed zones become available for selection for foraging, with the number of Map Rooms determining how many foraging zones can be selected at any given time. With an upgraded Map Room, pollenation teams can be sent out to explored zones to add bonus resources to a zone that become available after a short period (depending on how far away that zone is from the hive). Foraging zones also have a danger rating, and foraging in a dangerous zone can result in Foragers and Worker bees dying. The most dangerous zones can self-pollenate, potentially resulting in resources beyond Pollen and Nectar being attainable.

The new defence mechanics allow Defender bees to be deployed from the hive to protect Foragers and Workers as they gather resources in dangerous foraging zones. If a Worker or Forager would have died, a Defender will take the hit instead, making the Defender population a consumable resource and safety net for gathering high risk resources.

These new bits are still a bit rough round the edges so far as UI goes. The foraging screen feels pretty cluttered, and the explore/pollenate buttons don't clearly communicate when they're in their pressed state. I'm feeling like it's ready to go out though, and I can tweak things over the coming week ahead of exhibiting at Kid I Am next weekend.

Balancing-wise, I think that new Defenders will need to automatically replenish defenders deployed outside, since right now, it requires far too much micromanagement in order to be useful (I've already written code for this, but wanted to give it more testing before putting it in a build). The threat of dangerous zones probably needs to be increased as well so that high Forager spawn rates aren't a free pass to ignore foraging dangers.

Looking ahead, exploring foraging zones will also unlock certain kinds of events, and I'm toying with the idea of limiting the buildable area in order to allow foraging zones adjacent to the hive to be converted into usable hive space (not sure that this one is worth the effort, but it's an idea I'll let bounce around until I can noodle through all the ins and outs).

Also included in this update is a new background track from Peter, called Quiet Evening, which we've currently popped in as backing for the game's credits as well. As usual, here are some thoughts from Peter on the new track:

"I wanted to find a way of getting the ukelele to feature more in a piece after using it in Beeginnings and the Queen's half-life celebration, which some how led me to this slightly bluesier piece for the background. I'm continuing my theme of being inspired by parts of the day for background pieces - I like the idea that the music sort of implies a passage of time even if it's not part of the gameplay. The foragers have come home, the night shift has started and the bee bartender is handing out advice to a lovesick builder on his 3rd cup of nectar."

There are a lot of other miscellaneous tweaks and fixes (some of which are addressing things spotted during today's dev stream and don't address problems that were present in any live builds), so have a look over the changelog. Particularly of note, construction related AI should now be behaving properly with regards to leaving construction sites immediately after construction is completed.