Another slow week for published updates, but a pretty productive week for me. 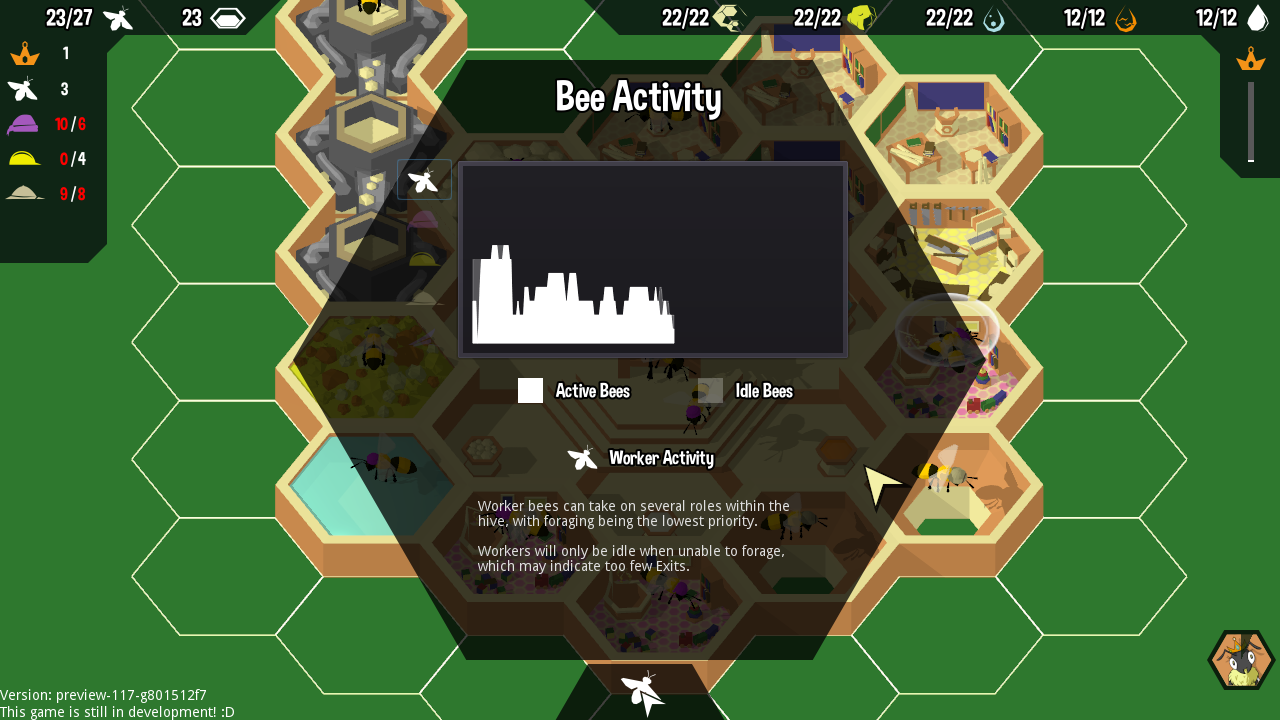 The biggest addition in this build is the new Bee Activity screen, which allows the idle and active state of bee populations to be reviewed. This helps identify possible areas for efficiency increases and potential problems. Very early on, I'd hoped that this would be inferrable by observing the hive, and for a dozen or two bees, it nearly is. As the hive grows and it becomes pretty much impossible to track individual bees, and the ebb and flow of role populations is just as hard to see.

I'm on the fence at the moment about how much direct advice/information this screen should give players, since I want players to feel like they can pursue their own strategies and discover what works/what doesn't rather than have me tell them a single way to do things. I'm sure I'll do a lot of iteration, but for now, I think it's a good start.

The Bee Activity screen is exposed from the new Throne Room upgrade, and currently unlocks jelly related research options (providing upgraded workshops are present). The current research and building costs require a hive that's got storage cells and upgraded workshops, and I'm hoping that this will break up the sense of the upgraded workshop just unlocking everything.

Peter's popped in a new music track that plays during the "Midlife Crisis" event that triggers when the current Queen reaches half her lifespan, and has this to say about it:

"For halfway through the queen's life we wanted something a little bit more celebratory. I created a more upbeat, folksy tune which uses the queen's motif (which also appears in Beeginnings, Peace, the main menu music among others) in the bass line (and later on piano). The tune takes on a momentarily more uncertain tone in its second half. I didn't want it to be all smiles, after all, being halfway through life has implications."

Last, but not least, on top of a bunch of other misc fixes and tweaks, I've added a small UX update that I've been meaning to do for a while: having vignettes be cleared when right clicking on their activity indicators (previously, that would just remove the activity indicator, leaving no way to get rid of the vignette itself without clicking on it or waiting for it to go away). I know that currently, the small pool of vignettes makes them a little annoying for some players. I hope that this won't stop people from checking them out from time to time, but I do appreciate that having them forced isn't so much fun.