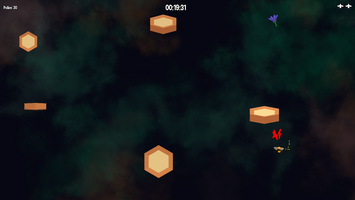 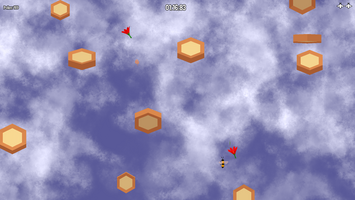 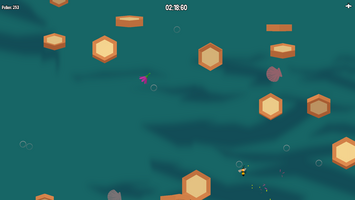 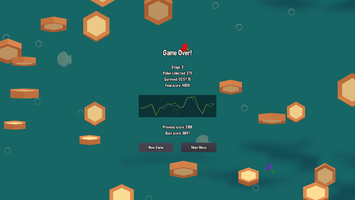 Today's Honeycomb CRUNCH update features a whole bunch of changes, but there are are a couple that are worth making specific note of. Firstly, on the gameplay front, the game now has discrete stages, and little rest periods between to help track progress and give a sense of surviving a crescendo. My hope is that this makes the game feel like less "Super Hexagon hard" that you'll never be good at and more like a game that you play for a few minutes and be comfortable with that. This is a tricky thing to wrangle for games with increasing difficulty and no end. It's hard to say how well I've nailed it, but we'll see!

The pollen required to get another bee has been doubled, but additional flower variants with greater pollen counts have been added, and overall, it's about as difficult to acquire more bees as it previously was.

Finally, I've also added full comments to every script in the codebase, hopefully to an extent that newcomers to Godot and to making games can pick up on what's happening and why. This has been the main item on my todo list, and was really the whole purpose of this project to begin with, so it's good to have some closure on that!

For now at least, I'm calling Honeycomb CRUNCH done and will shift back over onto Hive Time and In the Snowy Winter's Wake development for the foreseeable future. I've had a bunch of fun making Honeycomb CRUNCH, and even though I didn't manage to slip in the honey hexagons (invulnerabiltiy) or corrupted hexagons (proximity triggers explosion with a wide blast radius) I had initially planned, I'm not sure that the game really needs them. Over the past few days, I've logged more time playing Honeycomb CRUNCH for fun than I have actually testing my changes, and that tells me that it's pretty close to where it wants to be.