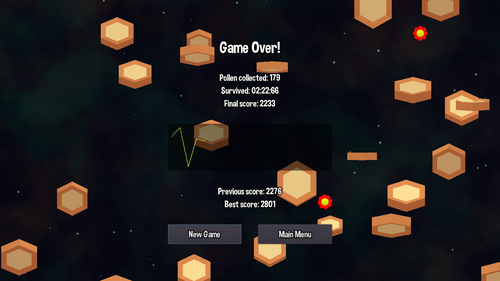 Three main changes in today's build that are worth noting. New bees are now spawned above the play area and descent can be controlled to avoid starting in front of an oncoming hex, it's now possible to pause a game mid-run, and the game over screen now displays an unlabelled graph of the past 20 scores and times.

In addition to the attached builds, these changes are also live in the game's GitLab repo.

Still planning to do a comment and tidy pass on the code to make it a bit more readable, but that probably won't happen for a couple of days.