Today's build includes a bunch of under the hood refactoring. 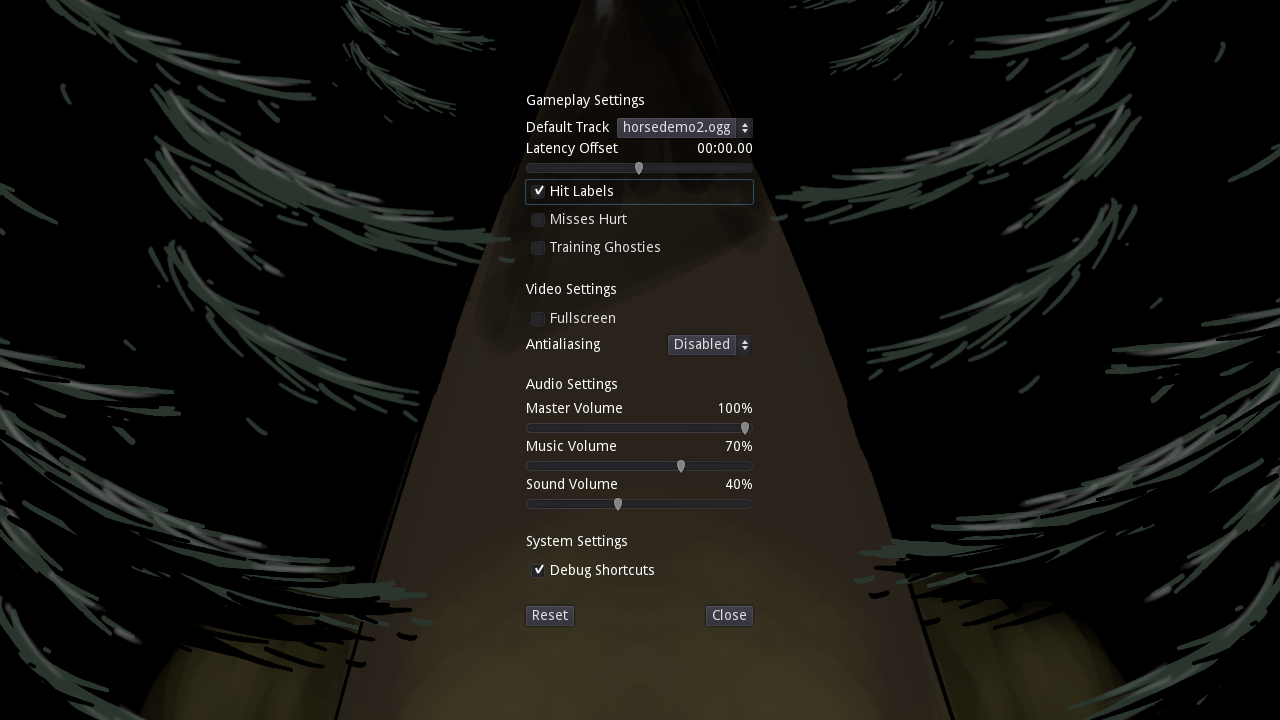 The biggest changes are that the settings screen is now dynamically generated by settings definitions that also allow for the majority of the game's settings to be set, stored, loaded, and updated without setting-specific code.

By declaring settings with a Dictionary of Dictionaries that looks something like this, UI widgets can be automatically generated based on the defined type (a checkbox for boolean values, dropdown option buttons for string arrays, etc.).

At startup, the setting name is inserted into the setting's dict under the "name" key, and runtime settings are retrieved from there. For things that need code to be run once a setting has been updated, the game will call an "apply_func" if defined, or will look for any function that matches the setting name prepended with "set_" (like set_fullscreen()).

If the setting value needs to be tweaked before being displayed to the user (like the volume settings being displayed as a percentage, or latency offset as a mm:ss.ss string), a "user_value_func" can be defined to generate that.

It's not particularly fancy, but abstracting this stuff as much as possible and generating UI means that adding future settings can just be a matter of adding a definition. Centralising this stuff means that things only need to be added once, and in one place. Maintainance becomes a little easier, and if there's a bug, then it'll be more likely to manifest broadly and be immediately noticeable than be constrained to some rarely looked at button at the bottom of a menu somewhere.

If I want to later change the visual representation of the settings menu into some kind of diagetic scratched-into-the-bleeding-bark-of-trees-by-the-last-physical-manifestations-of-the-tormented-souls-that-haunt-the-forest thing, then the only thing that changes is the UI generation code, which is all compartmentalised and independent of everything else. Nice.

Nemoder's been working on some placeholder audio effects, and while they're still very placeholder, they're going to be an important part of nailing down the core game and making sure that we've got all the different moving parts functioning as they need to.

This build also contains a fix for the game hard locking when returning to the menu after dying. I'm sure that bug wasn't there when I was testing the previous builds before release. They might be possessed.